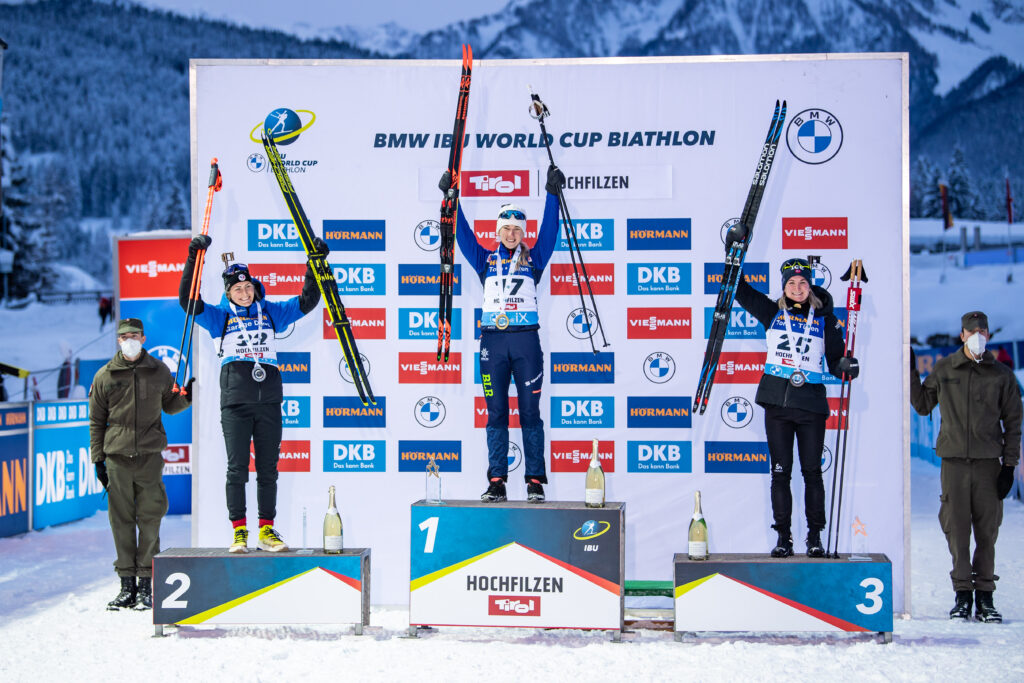 This victory was long overdue. After her third and fifth place from both sprints of Östersund, 25-year-old Hanna Sola from Belarus also wins the 7.5 km sprint race of Hochfilzen, the first World Cup of her career and stands on top of the podium for the first time. After her second place with the relay, one could therefore say she has ignited the turbo.

After two clear shootings and an outstanding run time she won with a final time of 20:44.4 minutes, ahead of the also very strong Justine Braisaz-Bouchet, who catapulted herself to second place despite two penalty loops and 46.8 seconds behind and could convince again in the cross-country race. Norwegian Marte Olsbu Roiseland finished third with a gap of 50.3 seconds. She thus takes the overall World Cup lead and will start in the pursuit race in the yellow jersey. Young Ida Lien also hit all ten targets and was rewarded with fourth place. Last year's overall World Cup winner Tiril Eckhoff seemed to get back on track, missed only one target and finished sixth, her best result so far this winter. Best DSV skier was Vanessa Hinz in tenth place without any misses.
Results 75, Km women's sprint Hochfilzen:
1. Hanna Sola, BLR              20.44,4 Min.
2. Justine Braisaz, FRA       + 46,8 Sek.
3. Marte Olsbu, NOR           + 50,3 Sek.
4. Ida Lien. NOR                    + 52,5 Sek.
6. Tiril Eckhoff, NOR              + 1.07,2 Min.
Statement Hanna Sola:" I am speechless, last week in Sweden was already very successful, but now to win my first World Cup....a big dream comes true."
Statement Justine Braisaz-Bouchet:“ Dieser zweiter Platz bin einem Einzelrennen tut so gut.“
Statement Marte Olsbu Roiseland:" That race took a lot of energy, and with a place on the podium you are never satisfied. Now I have even taken YELLOW and hope to wear and defend it for some time."
Statement Tiril Eckhoff:" This was the best result this winter and I hope now it continues to go uphill."
Pictures: K. Voigt Fotografie
Share on facebook
Share on twitter
Share on tumblr
Share on whatsapp
Share on email