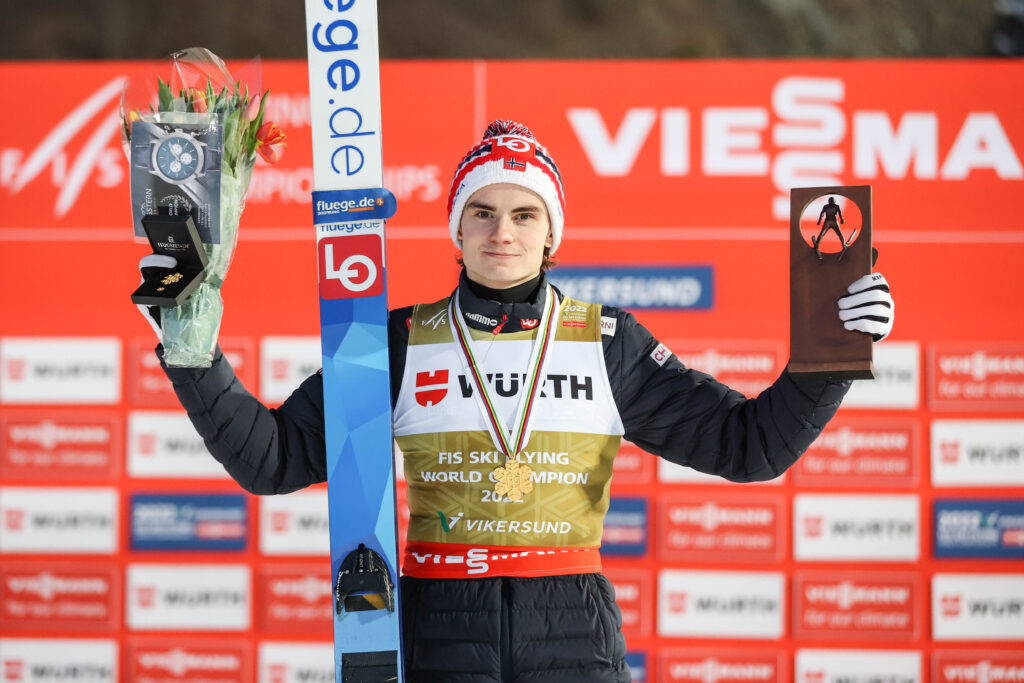 Once it's up and running...

There are quite a few experts who claim that ski jumping is primarily decided in the mind. Marius Lindvik seems to be a prime example for the correctness of this steep thesis. The Norwegian ran after great successes for a long time, failed again and again because of small things or things he could not influence himself.

But the great talent from the motherland of ski jumping delivered this winter at the season's highlights. In Beijing, the 23-year-old won on the large hill and less than a month later he managed another big coup in his home country. Lindvik became ski flying world champion in Vikersund. And if you are honest, you have to admit that few people really expected this success. Because among the Scandinavians, others were considered to be gifted flyers. Robert Johannson, for example, the man with the mustache. Even selection coach Alexander Stöckl had made special mention of him. Or Daniel Andre Tande. The same Tande who had fallen so badly while flying in Planica a year ago and who celebrated a great post-Olympic comeback with his victory at Holmenkollen in Oslo, just outside his hometown. Or Halvor Egnar Granerud - 2020 World Cup runner-up in Planica and a man who literally sniffs out the softest updrafts. Lindvik, on the other hand, was seen more as the man for jumping, not so much for flying. Until the World Championships. Because at the latest after the training and the qualification the man from Soerum - less than two hours by car from the world championship location - sailed along at the top. The top was made up of the usual suspects, all Slovenians, compatriot Johannson and Austrian Stefan Kraft, whose big goal was to grab the last title still missing in his exorbitant collection in Norway - that of ski flying world champion. Tande, on the other hand, showed - understandably - respect, the Germans fluttered behind and Granerud didn't get along with the "Monsterbakken" either.

After the first day of competition - the World Ski Flying Championships consist of four rounds, two on each day - a duel between Kraft and Lindvik became apparent. The local skier was in the lead, the Slovenians followed in second place and Robert Johannson also had a chance of winning a medal, but had to withdraw on the final day due to back problems. What followed was a thriller. First of all there was Timi Zaic. He soared like an eagle on the second day of the competition, a proud 245 meters in the test, then 243.5 and 235.5 meters in the competition. That impressed not only his compatriots, it also impressed veteran Stefan Kraft from Austria. He ended up third, Zaic won silver. Only one was able to fend off all attacks: Marius Lindvik. After his last flight, which propelled him over the famous green line, the new champion threw his arms up and 5,000 fans in the run-out rejoiced with their compatriot. Lindvik - that much is certain - has finally arrived in the circle of ski jumping superstars with this title. And he is a big name at home. Because he not only brought the Norwegians their first Olympic victory on the large hill since 1964, but also a new ski flying champion, the fourth after Ole Gunnar Fidjestoel in 1988, Roar Loekelsoj in 2004 and 2006 and Tande in 2018.