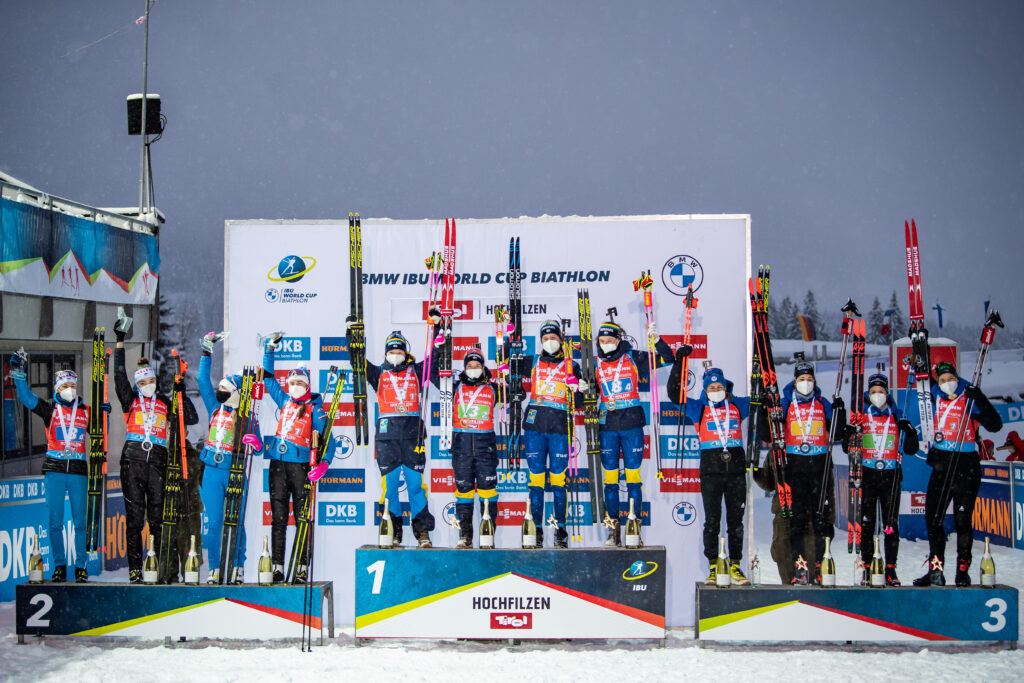 SWEDEN AHEAD OF RUSSIA AND FRANCE

With Linn Persson, Anna Magnusson, Elvira Oeberg and her sister Hanna as the final runner, Sweden won their first 4 X 6 km women's relay ahead of the again strong women's quartet from Russia, which was led to silver place by Kristina Reztsova. France started the race as one of the favorites and thanks to an outstanding performance of Justine Braisaz finished third on the podium ahead of the DSV women, where Denise Herrmann and final skier Franziska Preuss were very impressive. Translated with www.DeepL.com/Translator (free version)
A fierce battle for sixth place was fought between local hero Christina Rieder and Tiril Eckhoff from Norway, which was decided in favor of Austria by a photo finish.
For Sweden's women it was the first relay victory this season after third place in Östersund a week ago.
Results 4X 6 Km Women's Relay Hochfilzen:
1. Schweden         1.13.52,5 Std.
2.Russland            + 29,1 Sek.
3. Frankreich         + 52,9 Sek.
4. Deutschland      + 1.06,05 Min.
7. Norwegen            + 1.53,7 Min.
Statement Elvira Oeberg: " We were already very strong last week, and were able to compensate for our performance a bit more with the win."
Statement Justine Braisaz:" We were among the favorites, but had to replace Julia Simon at short notice, and are very satisfied with third place.
Personally, I'm very happy with my performance today as well, and I hope it stays that way."
Statement Tiril Eckhoff: "We wanted to be present at the award ceremony, unfortunately it didn't work out and we have to be satisfied with seventh place.
I notice that my form curve continues to rise, have given everything again and hope to be able to call up good performances in the next races."
Helmut Hanus, Hochfilzen
Pictures: K. Voigt Fotografie
Share on facebook
Share on twitter
Share on tumblr
Share on whatsapp
Share on email