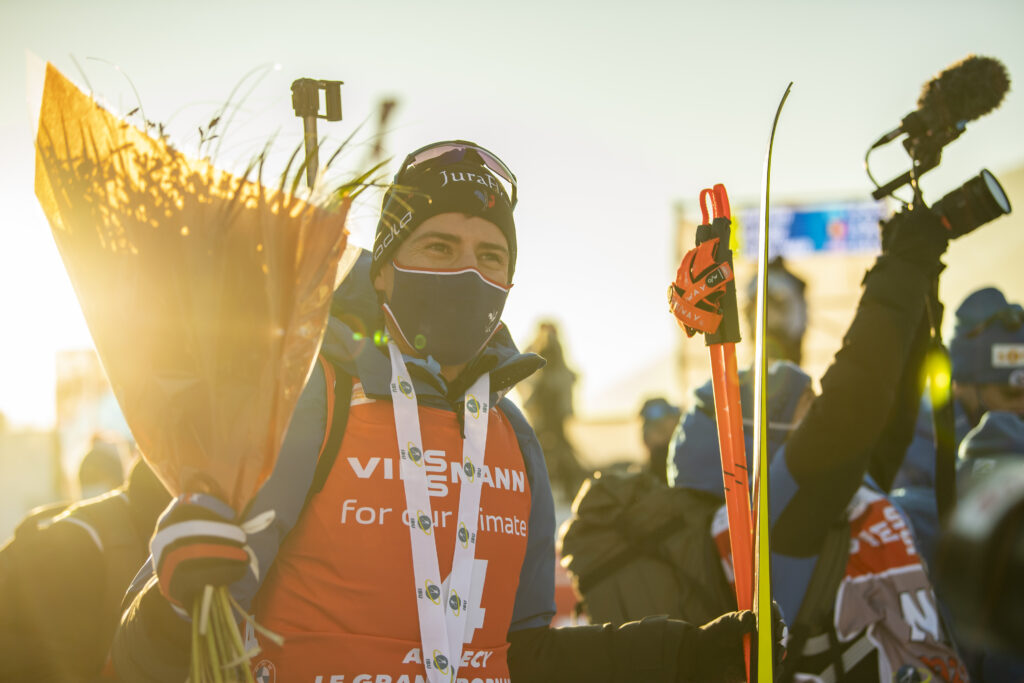 Shortly before the finish he grabs the French tricolor, is celebrated by the enthusiastic fans in the stands after his excellent victory in the 12.5 km chaser of Le Grand Bornand, and can watch the thrilling duel for the other places on the podium in peace at the finish.

The Norwegian Vetle Christiansen ignites the turbo once again and tries everything,
but in the end he is narrowly beaten in the final sprint by the Russian Eduard Latypov, who takes second place in the sprint as he did the day before.
Vetle Christiansen, who completes an excellent race ,finishes third.
The fantastic audience of Le Grand Bornand, which already filled the stadium in the early morning hours, created a breathtaking atmosphere and cheered on every athlete, may also feel like winners.
Johannes Thingnes Boe finished fifth with three penalties ahead of Sturla Holm Laegreid and his brother Tarjei in sixth and seventh place.
Fabien Claude finished in fourteenth place.
Simon Desthieux in seventeenth place, Alexander Loginov in eighteenth and the young
Sivert Bakken as twentieth make the TOP 20.
In the German team it was veteran Eric Lesser who was able to take the best result with him. With only one mistake he was able to work his way up from 26th to tenth place. Philipp Nawrath crossed the finish line in 13th place after two mistakes and was also able to make up a few places.
The same goes for Benedikt Doll, who turns 15.
Results 12,5 Km Pursuit , Men Le Grand Bornand :
1.Quentin Fillon Mailett, FRA    30.58,3 Min.
2. Eduard Latypov, RUS           + 16,10 Sek.
3. Vetle Christiansen, NOR      + 16,20 Sek.
5. JTB, NOR.                              + 43,30 Sek.
6. Sturla Holm Laegreid, NIOR + 52,90 Sek.
7. Tarjei Boe, NOR.                     + 1.09,80 Min.
14.Fabien Claude, FRA              +1.52,10 Min.
Statement Quentin Fillon Mailett:" It's an indescribable feeling to win here in front of these outstanding fans to whom I want to dedicate this victory.Now I want to do well in the mass start and then enjoy the free Christmas days."
Statement Vetle Christiansen: "It was a fight until the end, which unfortunately did not end for me. I thought that I could still crack him on the track.
But I am very satisfied with my third place today.I hope I can also perform well in the mass start."
Photo:K.Voigt Photography
Share on facebook
Share on twitter
Share on tumblr
Share on whatsapp
Share on email